Skip to content
So today I had my first lecture in Trondheim. It felt pretty much embarrassing as it turned out that the lecture language was Norwegian and my Norwegian skills were somewhat insufficient for attending a lecture (it got better during the 90 minutes, but not that much). Well, the lecture was not of my primary interest anyway. (That is the undisputed pro of universities in English-speaking countries) But then, I managed to get a Norwegian mobile number, so the day was not entirely unproductive.

Between lectures, I was reading more stuff from Less Wrong (yeah, I am advertising a bit 😉 ); mostly, the ideas depicted there are pretty much sensible and one of the most important ones can be compressed as follows: Any worthy (scientific) idea has to decrease entropy and narrows down explanations. Example: Saying “The system shows emergent behavior because of its great complexity” is not an explanation since it uses buzzwords without revealing any details. Another things that are worth reading are the articles on cognitive biases. They make me want to replace my rusty old brain with an inference engine (if possible, clocked at the same speed, thank you). And, if you want the same stuff, but wrapped into a story, just follow the link. You have been warned.

Oh, and pictures for attention attraction: 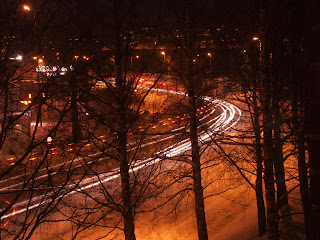 (This one is brought to you by my tripod) 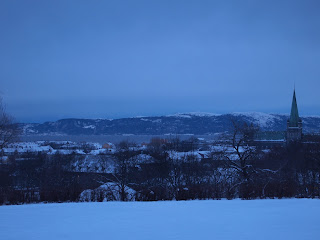 And this is a nice view of the city center (yes, it is not that big) with the Nidaros cathedral on the right and the fjord in the background.